After what seemed a never-ending rainy season, I was finally able to get Irene out of her slip.  One of the most exhilarating feelings in the world is peering outside your window to see the sun shining, minimal wind, and zero white caps.  That’s when you fire up the engines, get everyone aboard and head out the channel to make new memories.

Stay tuned for pictures from the family’s visit……

Your friend Billie lives on a boat and after days of on-line and store-to-store shopping, you finally found the perfect gift. At last years holiday gathering, you anxiously watched Billie unwrap the 18″x24″ abstract painting that you thought would fit perfectly on wall of Billie’s boat.  Billie was elated, but when October and November rolled around the painting was nowhere to be found. Before you know it, another year has gone by and you have to restart the painful process of finding that perfect gift for Billie.

So where do you start? Here’s a starter list that will cover a range of budgets, boating lifestyles and tastes. If you have more ideas to add to the list, please feel free to do so.

https://www.gcaptain.com (sailing gear and no the “g” does not stand for Geli)

https://www.rei.com (during the winter/rainy months remember that fleece is a sailors best friend)

https://www.BevMo.com (there are never enough Libations!)

https://athleta.com (for that Yoga Sailor)

https://itunes.com (a gift certificate for the music lover and avid reader)

https://nauticalscout.com (for that delivery captain that is always in need of a stow away coffee pot)

https://barkbox.com (a big thanks to my sister for turning me on to this, a dog lovers best friend)

…and if you’re still in doubt give Bille Non-Stick, every single boater needs Non-Stick.

A common perception is that being at sea, particularly night watch equates to the “feeling” of being alone. It can be quite the opposite, as it was the first time I felt “whole”.

These are the questions I’m typically asked: “Why? What is it? Do you get bored? What do you do on night watch? How fast do you go? Do you have access to the internet?” Well, besides pouring yourself a piping hot cup of coffee, you have to simultaneously ensure everything is in working order, plot and maintain course, watch for boats, oil rigs, rocks, etc, as well as any changes in the weather and sea state. It is not a one time check list as you continually do these things during your watch. Watch is serious, as your crew is depending on you to not only make headway, but to do it safely. Special thanks and appreciation if you can do all that without disturbing anyone’s sleep.

Night watch can be 3-4 hour shifts and I believe that these hours of the wee morning are “yours”. It’s a time to fully appreciate the beauty of the moon, the stars, the sounds of the wind and the waves. It’s a time to reflect on where you have been, what you may have been, and what you still yearn to become. It’s a time to reconcile regrets and make new commitments. The ocean, just as life, brings both feelings of euphoria and hysteria. It is a time to untether from Facebook and be in the moment, utilize all your senses, and be at peace with who you are. In summary, it is magical. If you have the fortune to have this experience with those you love, it’s priceless. 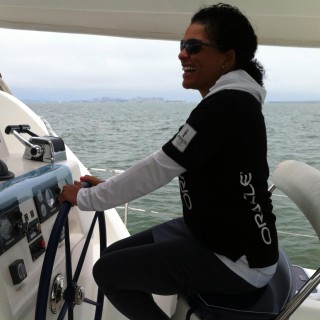